There are two major kinds of ammunition that you can buy for your semi-automatic pistol here, in the USA: Full Metal Jacket and Hollow Point cartridges.

Full Metal Jacket (FMJ) are easier to make and therefore a lot cheaper per cartridge than Hollow Points (HP). The bullet in a FMJ cartridge is a solid mass of soft lead that’s encased in a harder metal.

Because of this structure, a FMJ bullet loses very little energy when it hits its target. If a FMJ bullet is shot at a person, it is very likely that it will pass right through the person’s body, and keep going. If there’s another person behind the first, it could very well go through that person too. This is why it is recommended to use FMJ for target practice at the range only. It is too dangerous to use in defense situations. 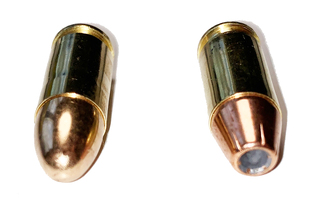 HP cartridges are recommended for defense uses. They will lose a lot (if not all) of their energy after they hit the target. While a FMJ bullet will go in and out of a person in almost a straight line leaving a tiny cavity behind it, a HP bullet will expand and cause tissue damage to a large area. An HP bullet is a lot more lethal. But there’s more to it than that:

If you ever have to use your gun in a self-defense situation and shoot a person, you will almost certainly have to justify your actions to a police officer, a judge, and/or a jury. If you used a FMJ cartridge that went through your assailant and hit an innocent party behind them, you will have two incidents you will have to justify. You could be in a lot more legal hot water because you used a FMJ cartridge as opposed to the HP. (All of this is applicable to the US only. In other NATO countries, HP cartridges may be illegal.)

This is a very important thing to consider when you decide what kind of ammunition to put into your gun. How would it look to a jury if and when a prosecutor brings attention to the ammunition that you used? Would your ammo choice make you look like a responsible citizen whose sole intention was protecting themselves, or would it make you look like a trigger happy nutjob looking to cause as much harm in as flashy a manner as possible?

Consider the fact that many manufacturers of HP cartridges come in at least two flavors: Defense and Duty. For example, Hornady makes HP cartridges called “Hornady Critical Defense” and “Hornay Critical Duty.” The Duty rounds are recommended for use by law enforcement only. But you can buy them. And use them. If you’re on the stand defending yourself after a shooting where you used Duty bullets, a prosecutor can paint a picture of you as an aggressor who wanted to use ammunition that was ‘beyond your level.’ Your chances of getting acquitted would be a lot lower than if you used a Defense round.

For the same reason, it is important that you don’t try to be cute or humorous in how you present yourself or the ammo that you buy. If you are being prosecuted for using your gun, and your ammo manufacturer has something like “Exxtreme Death and Mayhem” printed on the box, you can be sure that the prosecutor will make a point of letting the jury know about that. It would not work in your favor. Similarly, if you have a bumper sticker on your pickup truck that say something like “Keep honking, I’m reloading,” any decent prosecutor will use to further taint the jury’s impression of you, presenting you as a person who’s just itching to use their gun, even when it’s not necessary.

Continue reading: The Importance of Having a Routine